EXPERTS  REVEAL THEIR SECRETS ABOUT UFOs and aliens!

​​Among the many experts I’m releasing information from, is the amazing Nikola Tesla. You may have heard of his investigation into strange signals being received from space, but you won't believe that he was actually in continuous communication with the aliens for years usually special electronic equipment and even able to pinpoint where the signals were coming from!

(Information from reliable sources claims that Tesla was receiving help from the aliens in bringing about many of his fantastic inventions!)

Tesla even designed a flying saucer, figured out how alien craft worked, designed weapons to repel an alien invasion and much, much more.

He was so successful that the government actually seized a lot of his papers and classified many of his inventions as top-secret. His ideas are the basis of the Star Wars system designed to protect the World from an alien attack!

And I'm sure you have heard of Colonel Philip Corso author of "The Day After Roswell," but there is more to that story than just back-engineering artifacts from crashed UFOs that he wrote about in his book… There were secret notes and diaries that revealed his actual contact with aliens, and their conversations, If you’ve read his book, you will be amazed by what was left out of it!

Dr. Michael Wolf was involved with the government for many years and has revealed so much about aliens! I've got so much for you to read, wow!

Dr. Townsend Brown has actually duplicated alien technologies and discovered the secrets of their spacecraft propulsion system, and how they can withstand travel at faster than the speed of light!

Many of his discoveries are being used today in our secret space program. Ooops, I don't think I'm supposed to reveal information on that, oh well, too late.

With this book, you will finally be able to understand the many secrets behind how UFOs work, how much of this alien technology is now being used by our government, some right in front of your eyes! Plus, you might even get a better understanding of aliens think!

This is the information you’ve been searching for years for!

​There are so many more experts with hot information that I’ve shared with you in this book that you may be shocked. And I'm sure you will agree with me that this book (#15 in the Blue Planet Project Series), is this most amazing book ever! ​

Top scientists, military and government experts reveal ALL their secrets on ALIENS and UFO’s!

Is this the long-awaited-for DISCLOSURE?

Experts like Tesla and Einstein, pretty logical folks, right? You wouldn't expect them to have been investigating aliens and UFO’s during their lifetimes, but they turned up some shocking stuff on aliens.

We've heard about Tesla's amazing experiments with electricity and Einstein’s Theory of Relativity and so much more, but wait till you read what has been hidden from us.

Someone or something has done a good job of hiding all this information from us, very strange indeed. But no longer!

As you have probably realized by now, I have ways of getting and revealing information that was meant to be hidden - lost or forgotten secrets and I don't care who gets upset with me!

I guarantee you will find all this as amazing, intriguing and fascinating as I did.

This just released book is crammed full of secrets, alien secrets from some of the world’s top experts. But these secrets have been hidden from us, that is until now!

Often, a famous scientist is reluctant to talk about discoveries involving aliens and UFOs outside of a close circle of similar-minded coworkers because of the damage it could do to their careers.

But, in most cases, these secrets were classified as top-secret preventing them from even discussing them with their families in some cases. Yes, the same government that claims UFOs don’t exist, and everything we see up there is something else or just our imagination, is quick to classify everything about aliens and UFOs as top-secret information and will come down hard on anyone leaking this information, and often will eliminate those leaking this information.

Now I’m going to bring you all these alien secrets that I’ve been working hard to unbury! Sure, the government won’t be too happy with me when they get wind of this new book, but that’s nothing new. Me and some of these government agencies have been at odds for years. (Soon as the time is right, I’ll release that information too, it will make for interesting reading) 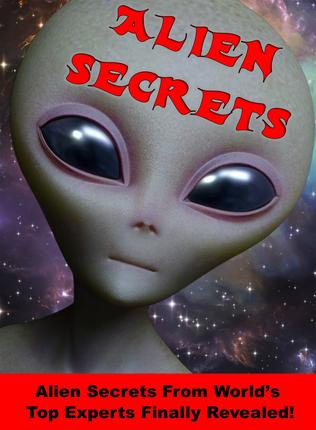 You are going to get a giant spindle-bound (this makes it easier to lay flat and study all the information crammed inside here) manuscript with 142 big 8.5  x 11 size pages!