​​You are going to get a large comb-bound government report style manuscript with 98 big 8.5 x11 size pages!

Plus my personal guarantee

that you must be completely satisfied with this book or get a full refund!​

Yes, that photo showing an ominous, saucer-like craft hovering over the city may send chills down your spine, but I’m going to reveal what really happened and the secret of what happened to this UFO!

Remember the massive cover-up at Roswell where the residents were threatened with being locked up for years and several that were close to the truth died under mysterious circumstances? Well the Battle of Los Angeles happened a full 5 years earlier than Roswell, so you can imagine how frantic the government was to keep the truth hidden!

So, if you no longer fall for that weather balloon line, follow along with me as I share the truth with you!

I'm anxious to get this new book into your hands immediately, and remember, I guarantee you will love this book!
​
Gil Carlson

They tracked a giant alien craft on radar from 120 miles off the coast as it headed towards Los Angeles and followed its deliberate path along the shore, behind mountains and around the largest gun emplacements.

Then after firing over 1400 antiaircraft shells at it, the military said it was nothing, just jittery nerves, our imagination or even a weather balloon.

But the L.A. Times wasn’t afraid that we couldn’t handle the truth that it was a possible extraterrestrial attack and didn’t hesitate to publish that famous photo showing the image of a very large alien craft at the end of the searchlight beams and in the middle of the bursting shells!

Order yours today and I'll ship it to you immediately!

Battle of Los Angeles - Fighting off an Alien Craft! 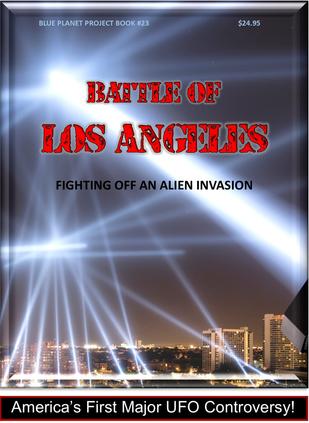