​​This is not just about “Behold a Pale Horse,” This is about the whole life of William Cooper and the secrets I’ve discovered in his other writings!

The secrets of William Cooper, His book: “Behold a Pale Horse” and secret government documents are finally revealed and brought up to date!

This a 2016 look at what transpired over 25 years ago! It is totally amazing what Bill Cooper discovered about UFO, aliens, government conspiracies.

Only Bill Cooper was close enough to this top secret info to be able to discover it. He has revealed secrets about Kennedy assassination, the truth about the war on drugs, the Secret Government as well as UFO revelations!

Mr. Cooper correctly predicted the lowering of the Iron Curtain, the fall of the Berlin Wall and the invasion of Panama.

Based on what he discovered in Top Secret documents that he read while with the Intelligence Briefing Team. Now you can discover the rest of the story…

Mr. Cooper claimed that what will soon be upon us will result in the most wonderful experience in the history of man or the most horrible enslavement that you can imagine.

Discover what he predicted about what the future will bring and how it will affect your life!

The story of William Cooper: A fanatic or a visionary?

How does Bill Cooper’s message ON UFOS AND CONSPIRACIES stand up today? 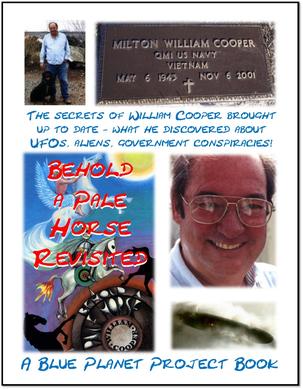 You are going to get a giant spindle-bound (this makes it easier to lay flat and study all the information crammed inside here) manuscript with 121 big 8.5  x 11 size pages!