Here it is: An amazing collection of all 3 of the books that revealed the secret files of Jefferson Souza and stood the world of UFO and alien investigators on its head!

A while ago, when I got the idea of putting these 3 books together, I was excited with the results, I showed it to my daughter and said: “Look how great this is, the 3 important Blue Planet Project books all in one giant book, it is beautiful, it is amazing, I love it, UFO researchers and alien fans can easily work with this and find exactly what they are looking for!”

And hopefully you will see the beauty of this giant tome. Put it on your coffee table to impress your friends and relatives, just make sure they don’t try to sneak out the door with it!

Now you may already have all the Blue Planet Project books so this won’t even interest you, unless you really want an amazing collector’s item! Or a great gift for anyone who is intrigued by government cover-ups, aliens and UFOs and want answers. And if you have just one Blue Planet Book, this is a great way to get the other 2 of the 3 hardcore Blue Planet Project books for less than the cost of buying 2 separately. If you don’t have any of these 3, now is the chance to get this beautiful giant trilogy for less than the cost of buying the 3 books separately. 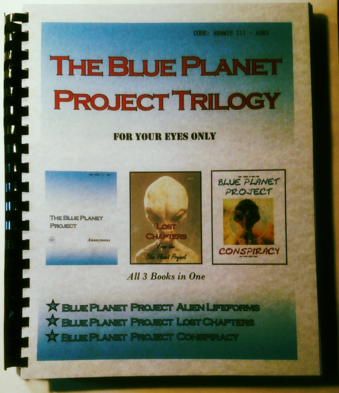 government secrets created by a government informer. This information on alien life forms and the government’s involvement with them and their technology was never to be released to the public and certain government agencies were very unhappy when it was first released in print.

And then it became almost impossible to obtain and the anonymous author disappeared for many years. Then in 2014 the Blue Planet Project Lost Chapters book was released. This was recently discovered information that was meant to be included with the original Blue Planet Project but was too lengthy to fit in and was lost for many years. This included info on Alien pharmaceuticals, UFO propulsion systems and additional info on the aliens.

Then in 2016 the anonymous author and government informer was discovered and without regard to repercussions any from government agencies, contact was made which led to a spilling-of-the-beans on how he obtained the info, amazing revelations that brought us up-to-date on this amazing book that set the UFO world on its toes as well as everything about his personal history and what his present situation is. All this latest astonishing info that answered all our questions was just recently published in a book titled Blue Planet Project Conspiracy.

And all 3 of these books that cover the Blue Planet Project mystery. This is a totally amazing collection of information that is a must read for anyone who is intrigued by government cover-ups, aliens and UFOs and want answers! This giant book is comb-bound which allows it to open flat and makes it easy to work with and to study all the facts inside. 294 large 8.5” x 11” pages with many full color illustrations. If these 3 books were purchased separately it could cost up to $80!

P.S.Order now-you will be glad you did!

P.P.S. Did I tell you this would make a great gift?
​
Gil Carlson