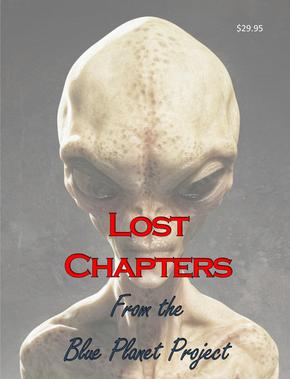 ​What has surfaced now is almost enough material to be called the second half of The Blue Planet Project Book!

But I like to call it: “Blue Planet Project Book – The Lost Chapters” and I’m sure that you too will find it very fascinating.​

And my main concern was to get this together and out to you as quickly as possible. In the original style of the Blue Planet Project, it is published in a spiral-binding format with the original black & white drawings and artwork and notes which may be in a type size that is not as easy to read as I would like, but here it is in the original format going back to at least the 90’s maybe even earlier.

​Are you ready to get your copy of The Blue Planet Project-Lost Chapters? Brave enough to discover what's revealed inside?

​​There's more about what the government has been hiding, and the rest of the story that scientist wrote inside his notebook!

The depth of their involvement with alien abductions and genetic experimentation was staggering! And on top of that, we learned of the fantastic efforts used to cover up an unbelievable betrayal by our government!

Until the release of The Blue Planet Project in the 90’s, everyone was in the dark. Then, even with the amazing amount of info, it was difficult for a lot of folks to comprehend that all this disregard for humanity was possible. Many folks just didn't want to believe it.

And, now it has recently been revealed that not all of the Blue Planet Project info was revealed at that time.

You are going to get a giant spindle-bound (this makes it easier to lay flat and study all the information crammed inside here) manuscript with 95 big 8.5  x 11 size pages!

Plus My Guarantee that if you decide this isn't for you, return for a full refund!

THIS IS WHAT WAS LEFT OUT OF THE BLUE PLANET PROJECT