figure out how they work as well as recovering alien bodies and possibly one live occupant?

Yes, I hear you saying, “Gil, where’s the proof, there’s no solid evidence!”

You are right, there’s no proof, but how could there be? Do you realize how many man hours were spent by the Army in scouring the desert to recover every scrap of evidence?
​
Threatening civilians to recover any saved piece of evidence, and threatening the residents of Roswell with jail and even death if they should talk? If it was only a weather balloon, why did they force everyone not to talk?
​
That is a powerful reason in itself to believe that there was an actual UFO incident! I always say:
“If UFOs don’t exist, why does the government try so
hard to convince us that they don’t exist?”
​
Of course the military displayed a weather balloon during their cover up, but would that really fool anyone into thinking that was what some folks thought was a flying saucer with aliens that the Army was loading aboard trucks under extremely secure conditions?
​
Gil Carlson

You are going to get a giant spindle-bound (this makes it easier to lay flat and study all the information crammed inside here) manuscript with 79 big 8.5  x 11 size pages!

Plus My Guarantee that you'll love it! 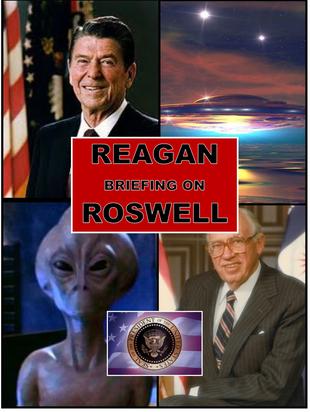 Now with the President Reagan Briefing on Roswell, I believe there is no way that the government can deny what actually happened at Roswell!
​
Anyone who listens to the tape from which the transcript in this book is taken from, can easily recognize the voices of such participants as President Reagan, so there is little chance that it could be a fake.
​
This material is so amazing, you will have trouble believing that it is actual available for you to read!
​
Not only will you be able to read about what really happened at Roswell (possibly far more bizarre than you ever imagined) but it explains more than just Roswell.
​
It reveals the shocking secrets of years of us cooperating with the aliens and their revelations about where they came from, other alien groups operating on this planet as well as who they are, where they came from and who created them!
​
Where did I get this powerful information from? I’ll never tell!

The Roswell crash in 1947 has long been considered the most important of all UFO crashes, if not the most famous.
​
How many other crashes has made so many people aware of actual UFOs and a chance to