This Giant Book Reveals Amazing Secrets on close to 200 UFO Crashes and Many Retrievals!

We may be able to consider this book to be DISCLOSURE!
Although it is not direct disclosure from a government official, but it indirect disclosure based on the actions of the government. (Anything revealed by the government would be mostly lies anyway.)
​
The government claims that UFOs and aliens do not exist and go out of their way to make fun of anyone that claims they are real or claims to have seen one. But of you have taken a photo of one, after they brand you as a kook, there’s a good chance that the Men in Black will show up at your door demanding your evidence.
​
But the government’s own actions prove unequivocally that UFOs and aliens are real, let me show you:
​
1. If they don’t exist why does the government work so hard to prove that they don’t exist?
​
2. According to documents: They consider that “Any encounter with entities known to be of extraterrestrial origin is to be considered to be a matter of national security and therefore classified TOP SECRET.”
​
3. Government documents claim that “Under no circumstances is the general public or the public press to learn of the existence of these entities. The official government policy is that such creatures do not exist, and that no agency of the federal government is now engaged in any study of extraterrestrials or their artifacts. Any deviation from this stated policy is absolutely forbidden.”
​
4. Penalties for disclosing classified information concerning extraterrestrials are quite severe.
​
5. Anyone involved in a “UFO close encounter” would become eligible for indefinite quarantine under armed guard. (And there are laws governing this that have been established by NASA.)
​
6. In December 1953, the Joint Chiefs of Staff issued Army-Navy-Air Force publication 146 that made the unauthorized release of information concerning UFOs a crime under the Espionage Act, punishable by up to 10 years in prison and a $10,000 fine. (This draconian penalty is what prevents most former military servicemen from coming forward to disclose information.)
​
But hey, I thought the government claimed aliens and UFOs don't exist?
​
7. The evidence concerning UFO crashes that are extraterrestrial in origin, and their covert retrieval by highly specialized teams involving joint military and government personnel, is extensive and persuasive. Understanding the highly classified procedures established to manage the retrieval of crashed UFOs have been revealed through special operations manuals that provide an important analytical framework for understanding, and answering questions about, classified procedures used for locating, isolating and recovering crashed UFOs that are extraterrestrial in origin.
​
8. There are the testimonies of a number of whistle-blowers who claim to have participated in UFO crash retrieval operations or participated in a number of highly classified extraterrestrial related projects.
​
​​​While I have no intention of knowingly revealing any government secrets, I believe that what is contained in this book needs to be revealed as a matter of public interest and withholding this information by any government agency, in today’s world, will increase the distrust and lack of confidence in our government and weaken its authority.

You are going to get a giant spindle-bound (this makes it easier to lay flat and study all the information crammed inside here) manuscript with 168 big 8.5  x 11 size pages! 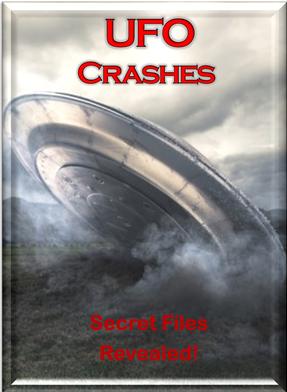 While it has been claimed that there is no proof that UFOs are real because there is no solid evidence, such as a piece of hardware, or metal fragment, this book reveals that there are actual samples that still exist in private hands. And of course they are scarce.
​
The government is very good at raking up every last trace of those UFO crashes.
​
Just let it be known that you have a UFO artifact, and see how long it takes the Feds to show up at your door and threatening your life if you don’t turn it over them that piece of a UFO they claim doesn't exist.
​
And these specialized UFO recovery teams are always alert and available at a moment’s notice to travel to almost any location on Earth to quickly recover crashed UFOs and their occupants, rake the area clean while preventing civilians and civil authorities from getting a glimpse of what they are recovering, even if it means the use of deadly force!
​
I believe that this is the most complete and revealing UFO book yet, it’s like an encyclopedia of UFO crashes, close to 200 of them and covering several thousand years! You are not going to believe your eyes as you read about amazing discoveries, cover-ups and revelations by government insiders. All the details and descriptions of these UFOs will amaze you!
​
Did you realize that after one retrieval, the crew of the truck carrying the recovered UFO, were found dead on the highway outside of the truck?
​
And did you know that our UFO retrieval teams have been known to go to other countries and snatch up downed UFOs and any wreckage and bodies before the local military can investigate? (Not that I’m saying I object to this; you wouldn’t want this evidence getting into the wrong hands.)
​
At one retrieval site, it was revealed that the military was under orders to shoot anyone that got close enough to see the downed UFO! (This is probably the standard operating procedure for these teams.)
​
Other than at the Roswell incident, we rarely hear about occupants in these crashed UFOs, dead or alive. That has changed, I’m revealing all that information so that you will be able to discover the true story about what has been going on with these visitors all these years!
​
How did these UFOs crash? Although I present a number of different theories in the back of this book, after reviewing all of these records, it is obvious that we can’t blame it on incompetent UFO pilots, inferior craft, lightning or our innocent use of a new radar design that accidentally interferes with their guidance system.
​
We are being misled, our government (as well as many other governments in this world) is very actively shooting down these UFOs with very powerful secret weapons that are way beyond Star Wars!
​
(I hope that some of these doomed space travelers weren’t coming here to show us how to live peacefully and invite us to join some Galactic Federation!)
​
Another consideration is that it is very likely that these visitors may not have traveled great distances to reach us, these UFOs may have originated from some secret alien bases here on Earth, or very likely from bases on the Moon! (Those are some of the things that the government is very anxious to hide from us, of course.)

I find your books very informative. They've led me to pursue web searches on items I've read in your books.
Since reading your books my mind has opened up too many realities I never thought possible.