on this amazing book!

You are going to get a giant spindle-bound (this makes it easier to lay flat and study all the information crammed inside here) manuscript with 99 big 8.5  x 11 size pages! 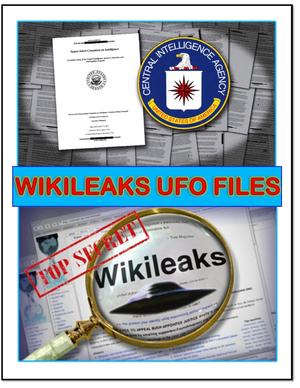 Ready to discover the governments secrets on UFOs and aliens?

​​This is AS CLOSE TO GOVERNMENT DISCLOSURE THAT WE WILL EVER GET!

OK, those WikiLeaks Clinton email releases caused a stir, but wait till you see UFO Files that have been hidden away! I’ve got a whole book full of government UFO files from WikiLeaks and several other secret sources.

You’ll soon discover why some government officials want Julian Assange dead, and I assume I won’t be too popular with the government either, now that I’m actually putting some of their most secret info into some many hands!

And all this amazing information is now available to you! Wondering what the government has been hiding behind Top Secret and higher classifications? This is your opportunity to find out.

CIA UFO INFO: The CIA has been gathering info on UFOs – Yes you already knew that, well here’s stuff you may not have known!
COSMIC TOP SECRET FILES: Here they are!
ALIEN TECHNOLOGY: Secrets from Wright-Patterson revealed, and you thought their secrets never got released!
MARS & THE MOON: And you thought all those rumors were nonsense, here’s what the government files have revealed!
BLACK KNIGHT SATELLITE: It is communicating!
UFO & ALIEN DISCLOSURE: Read what top officials in the government and military have secretly been saying about UFOs and aliens recorded in numerous documents that weren’t supposed to be released to the public.
MAJESTIC 12 FILES: Yes, Majestic 12 was real and it is still going strong, read what the government files say about it!
KENNEDY ASSASSINATION: You’ve heard the rumors about how it may have been because he wanted to release the UFO files, well here are the actual documents!
ALIEN LANDINGS: Here’s the proof!
TESLA & ALIENS: Yes, Tesla was communicating with aliens!
ALIEN MESSAGES: Yes, the government has received and decoded messages from aliens, here they are!
ALIEN ATTEMPTED COMMUNICATION: Believe it or not, aliens may have attempted to speak to Air Traffic Controllers!
MARILYN MONROE & ALIENS: The CIA tapped her phone, here’s what they heard about President Kennedy and aliens!
ALIEN SYMBOLS: You’ve heard about these being found in crashed alien craft, now see what they actually look like!
UFO INTERCEPTS: Now straight from NORAD, more info on actual intercepts of alien craft!
FASTWALKER UFOS: And the government is tracking them!
FBI & UFOS: Info revealed by the FBI files!
MISINFORMATION: Government attempts to mislead the public!
RUSSIAN UFO SECRETS: And you thought the never released secrets!
HUMAN ALIEN MUTILATION: All we hear about is cow mutilation by aliens, well they just may have done the same experimentations on humans, shocking!

And so much more you need to find out about! You won’t be disappointed, I guarantee it!

WOW! CLICK HERE TO SEE HOW YOU CAN GET SOME OF THESE BOOKS AT A DISCOUNT TODAY!
View on Mobile