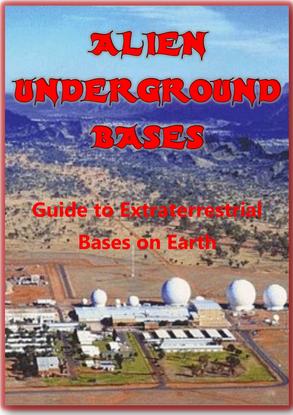 You are going to get a giant spindle-bound (this makes it easier to lay flat and study all the information crammed inside here) manuscript with 192 big 8.5  x 11 size pages!

The Complete Guide to Extraterrestrial Bases on Earth
Hundreds of strange and
mysterious locations that have revealed amazing, bizarre technology.
​
Some locations have been
sealed by the military.

secret bases!
​
While there are numerous Deep Underground Military Bases (DUMBS), and even several joint military/alien bases such as Dulce Base (See our previous book Secrets of the Dulce Base), this new book: Alien Underground Bases, covers the secret alien locations which government and military leaders around the world pretend don’t exist.
​
While some of these locations may have been home to aliens thousands of years ago and are most likely abandon today (has anyone gone down there to double-check?), many others could very well still be active! What could be going on there?
​
How about strange and mysterious scientific and military preparations? Genetic experiments involving humans, animals and plant life?
​
(Caution: Don’t go off alone trying to locate some of these alien hotspots…. There are some aliens there that claim we taste like chicken!)

Alien underground bases - SECRETS of ALIENS  UNDER THE EARTH!

I will throw in a shameless plug for the Blue Planet Project book series... whether you believe or not, I can personally contest to one of the most intriguing reads ever and as a person from the Antelope Valley Area, could connect many dots that rang very true within the book.... a must read!

​​While many may scoff at the idea of secret alien bases, consider that the U.S. Government takes the release of this information very seriously. Would they be so paranoid about this if there wasn’t anything to it?
​
Just remember the sad case of whistleblower Phil Schneider, a top expert on the construction of underground military bases.
​
The government claimed his death in 1996 was a suicide, but others claim it was more like a military execution and revealed that there appeared to be signs of a brutal beating. Schneider claimed to have been the subject of several assignation attempts.
​
One occurred in September of 1995, sixteen days before giving a lecture at the Preparedness Expo. He was shot in the shoulder by an FBI agent that Schneider claimed was trying to kill him. He killed the FBI agent in self-defense.
​
I’m not sure if a lot of folks realize it or not, but when Schneider was the recipient of a suicide, he was working on a book that was going to detail the precise latitude/longitude coordinates of all DUMBS (Deep Underground Military Bases) that he was aware of.
​
Schneider was killed in January 1996 and his book was never released.

Maybe it is time for you to discover what is going on with aliens possibly below our feet!
​
Gil Carlson